Kurt Schwertsik is one of the most unique and interesting composers of our times. His fierce individuality, unimpeachable integrity and sparkling imagination have given birth to a wide ranging body of work spanning 4 decades. Formative early encounters with Boulez, Henze, and Maderna (Darmstadt, 1955) and Stockhausen and Kagel (Cologne, 1959 - 60) were followed by Schwertsik's founding of the Ensemble for New Music, "Die Reihe" (with F. Cerha) in 1958 and the "Salon Konzerte" (with O. Zykan) in 1965. From 1955 to 1987 Schwertsik earned his living playing French horn as a member of the Wiener Symphoniker. From 1987 to 2003 he was Professor of Composition at the Unversität für Musik und Darstellende Kunst in Vienna. Major works by Schwertsik include numerous operas: Der Lange Weg zur Grossen Mauer (1974), Fanferlieschen (1982), Café Museum or Die Erleuchtung (1993), Der Ewige Frieden (1995), Die Welt der Mongolen (1997), and Katzelmacher (2003). His hysterically funny setting of Dahl's topsy-turvy revisitation of the Goldilocks fable for orchestra and narrator is a delicious example of Schwertsik's piquant sense of humor. More serious works include concertos for violin, guitar and most recently a concerto for trumpet virtuoso Hakon Hardenberger. His marimba concerto bears a typically humorous Schwertsik title: "Now You Hear Me; Now You Don't". Schwertsik's ballet, Kafka Amerika to choreography of Jochen Ulrich, was recently premiered by Dennis Russell Davies.

I refused to lapse into a lethargical acceptance of society's norms. With every fiber of my being, body and soul, I asserted my right to take a fresh look at all the sanctified works of our cultural canon.

At the same time Schwertsik declares, "I warn everyone to recognize their own limits... and limitations." Fundamental to Schwertsik's work are the yin and yang of modernity and tradition. The electricity generated by this dynamic generates works that - while grounded in impeccable compositional technique - are forever fresh: entertaining yet profound. 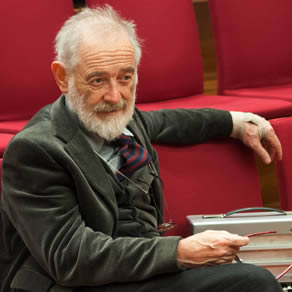