Paolo Devecchi is an Italian guitarist and composer with a rich and diverse musical background. The wide inspiration of his musical language is the result of an original quest which leads his music to explore new territories as well as the classical guitar repertoire.

He has written several works (originals and arrangements) for the guitar which, while firmly anchored to the classical tradition, refer to different genres (mainly to the jazz idiom, but also to folk and contemporary classical music). His works include solos, duos, trios, quartets, quintets and music with voice and guitar, arrangements of Antonio Vivaldi, Béla Bartók, Astor Piazzolla and Miles Davis, and innovative excursions into his own original repertoire.

In 1993, he was chosen as “guitar extra” for the stage and the orchestra of the Teatro alla Scala in Milan. He has collaborated with the RAI Symphony Orchestra (Milan), the RAI National Symphony Orchestra and the Teatro Regio (Turin), and the Teatro Carlo Felice (Genoa). In 2009, for the re-opening of the Teatro Carignano in Turin, he played the role of Teleghin in the Anton Čechov’s play “Uncle Vanya” directed by Gabriele Vacis, one of the most outstanding Italian drama directors; in this role he played on stage his own arrangements and original compositions, which were inspired by Russian musical tradition, receiving very good reviews from audiences and critics.

He has given recitals as a soloist and in duo with the jazz double bass player Dino Contenti. Since 1996 he has been playing in duo with Salvatore Seminara (Devecchi-Seminara Guitar Duo) at prestigious international music festivals in Albania, Argentina, Croatia, Czech Republic, Denmark, France, Germany, Israel, Italy, Lithuania, Mexico, Poland, Russia, Slovakia, Spain, Swizerland and United Kingdom. 2014 saw the release of the CD “Phares” featuring pieces composed and played by the duo; its title track “Phares”, a suite consisting of four movements dedicated to the lighthouses of Brittany, as well to Claude Debussy and Jules Verne, was commissioned by the renowned German Guitar Duo Gruber & Maklar.

In 2016 he recorded his first solo CD “Different Latitudes” for Wildner Records, playing his own solo original works and arrangements.

Some of his works are published by leading publishers (Edition Chanterelle at Allegra Musikverlag - Germany, Le Productions d'Oz - Canada). 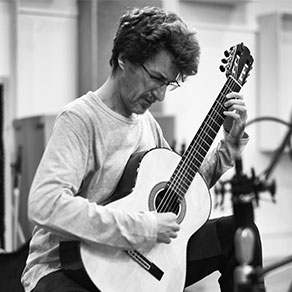