The composers featured on this CD have been my friends and my mentors.

Their music has challenged and continues to challenge me to grow beyond myself, to transcend the limitations of my instrument, and to extend my consciousness to realms that I would never have imagined but for their music. None of these composers was or is a guitarist. Therefore, one of the most interesting parts of our collaboration has been finding new ways of making the guitar sing so that the messages encoded in their music can be heard in their full communicative power and beauty. Surely John Corigliano never dreamed when he wrote The Red Violin Caprices for solo violin that some years later a crazy guitarist would venture to steal this work for the guitar!

Even with the music of Robert Beaser, Relly Raffman, and George Rochberg, with whom I worked intimately in creating final guitar versions, many slight changes were made.

As the poet Wallace Stevens once wrote, 'Things as they are/Are changed upon the blue guitar' (or in this case, The red Guitar!). Paradoxically, in all the music heard here, only by changing the literal original written text in many small (and sometimes not so small!) particulars was it possible to liberate the composer's voice to sing through the guitar as it should. At the same time, working directly with these wonderful living composers has given me insights into how far to go or not to go in the music I play from earlier times, where it is no longer possible to personally consult the composer!

I met John Corigliano when asked to play his Troubadors for guitar and orchestra at the Tanglewood Festival some years back. I knew John had no solo guitar music, but I thought that The Red Violin Caprices would make a fun guitar piece, and John very kindly let me have a go at it. Relly Raffman originally wrote Für Eliot in piano notation and in a register appropriate for the piano but with the intention that the work be played on the guitar.

Indeed, the character of this little gem was so ideally suited to the instrument that after about one hour's work I was able to make most of the suggestions that turned it into a true guitar piece. I still remember Relly coming into a room of his house as I was experimenting with some high harmonics saying, "Pretty, Pretty!" My beloved lifelong friend, Robert Beaser, composer of many important works for the guitar (most famously of Mountain Songs for flute and guitar and of the recent and epic Guitar Concerto) wrote Shenandoah on commission from an important guitar competition in Venezuela. Beaser's unique gift of transforming the familiar into something new and magical is in full display in this delightful work, which has already become a classic in the repertoire for solo guitar. George Rochberg was for me like a second father. Our close collaboration yielded many new works for the guitar, including one monumental solo violin work (Caprice Variations), which I stole lock, stock, and barrel from the violin. The American Bouquet was inspired by the solo guitar music of Villa-Lobos. Hearing some of the Brazilian master's works in one of my concerts, George dreamed up the idea of doing something comparable in an American idiom. The result is the Bouquet, for the most part settings of the "Tin Pan Alley" songs George heard growing up. These songs were the songs to which he and his lovely wife and amanuensis of more than five decades, Gene, fell in love. To flesh out the collection, George also set How to Explain and the Notre Dame Blues. The former is a transcription for solo guitar of one of George's songs with piano accompaniment, setting poetry of Rochberg's only son, the poet Paul Rochberg, who died tragically before his time. The raucous Notre Dame Blues reflects George's own early years in music when he supported himself in part by playing jazz piano in popular settings. Eliot Fisk, Boston, March 2010

When Eliot Fisk told me he was arranging my Red Violin Caprices for solo guitar I was amazed. When I heard what he has done with them, I was astounded.

A ravishing performance that brings back vivid memories of Eliot and Relly working together in our living room. Relly seems to me alive again when I listen to Eliot play this piece. He would have loved it." (2010, Prof. Dr. Diana Raffman) "The playing on Shenandoah is absolutely remarkable. What you do...continues to defy guitar logic but it more than satisfies musical necessity. When I wrote the piece, I imagined you would play it like this. Up until now, I held it as a dream... I love how the arpeggiated tune comes out of the big chordal section. It is amazingly poetic and grand...

2010, Prof. Robert Beaser in an email to Eliot Fisk

Now that the last note has sounded and the aroma of the "American Bouquet" fills my room, I just had to thank you for the amazing performance you've given the work. Not to string out a list of superlatives but to tell you this is as fearsome, sensitive, varied in mood and tone that I could ever imagine. Your understanding of the music and your mastery of the guitar that gives it sound and soul is beyond any way I could describe it. It is simply incredible, with all that you bring to life with such sensitivity and richness, that only you can wring out of the guitar. It is both concert music and music that is to be played under the windows of a loved one, which is something that we often heard in our months living in Mexico City.

February 2010, Mrs. Gene Rochberg in a letter to Eliot Fisk 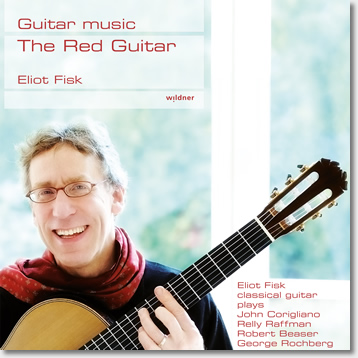