What leaves us is at the mercy of our imagination; it takes the form that we give it.
Grief also leaves us, subsiding into wistful sadness.
Yet we are still alive; we have survived and marvel daily at our own mundane existence.
Still we know: in time we also shall depart.
We can choose neither when nor where.
Still we have tried to give our life a meaning.
Though with us this meaning will disappear.
Not all at once: an echo will remain, and then fade away!
No monument, just an echo.
Yet we know the echo belongs to the sound that is its source.
Kurt Schwertsik, 29. März 2010
(translated by Eliot Fisk)

A New Work for Guitar of Historic Importance

"Ein kleines Requiem" is the product of several years of professional collaboration and ever deepening friendship with the eminent Austrian master of the "Third Viennese School", Kurt Schwertsik. I first met Kurt Schwertsik in the summer of 2002 when I was teaching a summer course organized by the Wiener Meisterkurse. After our first meeting that summer, Kurt began to send me little by little separate movements of the work that would eventually grow to become the Kleines Requiem. Right from the start, most of the movements were astonishingly well conceived for the guitar, yet they seemed to inhabit a completely new creative space as yet untouched even by the most creative of the non-guitarist composers who had written for the instrument.

As I wrestled with the many challenges presented by Kurt's work, the appropriate order of what had been sent to me only as a mostly unordered series of separate movements began to suggest itself. However, it was not until I began to prepare the present CD that the final order asserted itself as a kind of necessity - including the utter appropriateness of circling back to repeat some movements to round out the form, as Kurt had originally done only in the case of the Marche Boche. Although the present 18 movement structure now seems inevitable and right, it was in fact the product of some years of careful gestation, always supported by checking a performer's instincts with the wisdom of the work's creator. Truly, "Ein kleines Requiem", in part a requiem for Kurt's beloved friend, the iconoclastic writer, Wolfgang Bauer, is one of the most arresting and important works for guitar of the century!

All compositions by Kurt Schwertsik 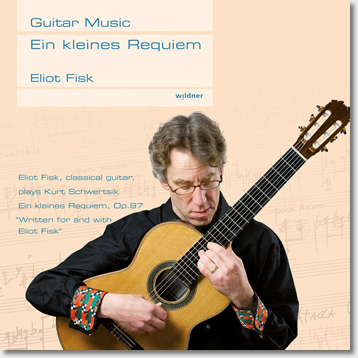